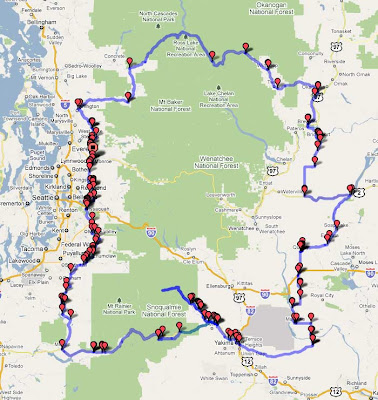 So, in about a week and a half, I'm going to line up with about a hundred like-minded people and head off on the Cascade 1200.  Some of you know better than I do what I'm getting into, and some of you have no idea.

I have some idea, but I'm going to take it as it comes.  Heck, a butterfly in Uganda probably just put into motion a set of events that will determine how hot it will be.  It's out of my control.

I'm not gonna kid you; this is going to be an interesting four days.

The ride is 1240Km. (770 miles)  One has 93 hours.  For a guy who grew up in Joisey, that's about the distance from Trenton to Jacksonville, Florida.  Sure, it's a good hundred miles shy of the distance from Urumqui to Tashkent, but you get the idea.

You could think of it as about 413.3 laps around Green Lake, but then you might go crazy.

I've been known to tell myself, "heck, it's only one lap around Green Lake to the next control, you can do that."  Unlike Green Lake, I doubt there will be Spuds fish and chips on the ride.  Ensure, Cliff Blocks, chocolate milk, Double Shots, PB&J, rotating hot dogs (for display purposes only), and Payday bars will probably appear in abundance, but I'm guessing there will be no Spuds.

I'll start off easy, and then I'll back off.  I'm going to eat this elephant one bite at a time.

My bike is good to go.  I'm bringing the Waterford.  I flirted with bringing a lighter bike, but after the 400, I never got around to tweaking one to work better on long distances.  My Waterford just works; I forget about it.  It is the bike I've used on three 600's and a 1000, and it is the one I'll take this time.  I like the way it rides with some weight in the bar bag, and I like the way it handles when I hit a pothole at night on day 3.

A couple of years ago, I worked the first overnight control on this ride.  I had just completed my first series, and I didn't think I'd ever attempt anything as audacious as the Cascade.

Of course I knew I would attempt the Cascade; I just didn't admit it to myself.  They gave the workers shirts that year with a big heart attack looking route profile on the back and a map of the state; it feels sort of odd wearing it.

Come on Kid, have just a taste; you can stop any time you want.  But look, all the cool kids are doing it.  Come ride a Populaire; it's free.  Here's a shirt, Kid; sure you can wear it.  No big thing.

I don't know how this is going to turn out, but I know arriving in Whitefish, Montana last year was a feeling you can't buy for all the tea in China.

I rode the Flying Wheels century last weekend with a friend who did his first century.  The course overlaps with some shorter loops, so you get to climb the last hill with people of all abilities who are out there doing it.  Some were walking or sitting on the guard rail.  Some were just goofing off, but they were all out there.  Good on 'em all, as they say.

I know a couple of guys who have held the national 24 hour record and have been competitive in RAAM; I'm not one of those guys.

For me -- for right now -- this is the hurdle.  The bar is magically set just right. It is exactly hard enough.  It's the opposite of my Room 101. Sure, I'll probably peek at the room along the way, but I'm not going there.