Portland to Glacier. Yes, that Glacier. 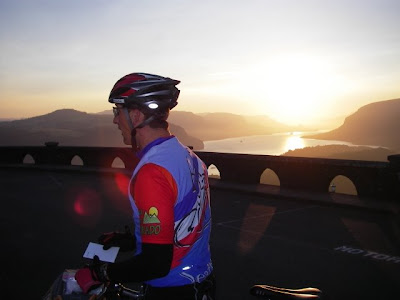 Sometime last winter I was on a training ride listening to a few riders chat about how magical Portland to Glacier was. While dodging posts in the bike path, I was stupid enough to say something to Mark like, "Wow that sounds amazing. I'd love to try that. If they run it, I'm in." I must have had a sufficient amount of caffeine that morning, because I think I had the rando equivalent of beer muscles.

Perhaps I had not clearly thought this through, for without much fanfare word went out that the ride was on. I pretty much had to go, right?

You see, I really was planning to spend not so much time on the bike this year. A few months later, Greg and I were wasting time at work, and one of us mentioned that we dropped the "megaton bomb" at home by casually saying we were thinking about the megameter ride.

Before you knew it, train tickets were in hand, hotel reservations booked, and I couldn't escape the gravitational pull of the ride.

(Somewhere on the third day of the ride, Karl mentioned that looking at altitude on his GPS was interesting because even a small decrease in elevation would bring on a significant increase in speed. The reformed physics major in me replied something along the lines of, "Yeah, well gravity isn't strong, but there sure is a lot of earth." After I said that, I realized I was pretty incoherent. But I'm getting ahead of myself.)

I had never gone over 600K, and I had a pretty miserable 400 this year, so the idea of a thousand was pretty scary. I asked everyone I could what's different going over 600, and everyone offered up their best advice. Still, I had the impression that you just can't describe it.

Vincent, Mark, and Geoff pre-rode the route and added some seriously useful comments to the cue sheet.

I asked Vinnie for advice, and he ominously told me to save something for the third day. He was optimistic as ever, but he warned me that I already had my easy ride for the year.

So, how did the ride go? It went great. I almost DNF'd in the heat on the first day. I was able to sleep a bit each night. My foot hurt so badly, I must have ridden 100 miles with my foot on top of my shoe. My bike worked wonderfully. I was able to eat the whole ride, which I am learning is everything.

I don't normally ride with music, but on the first day, I was burning up on a long section of road. It was hot. Hot. I was rationing my water. I turned on the iPod shuffle which, perfectly and randomly, started playing Elvis Presley's Burning Love. Priceless.

Lord almighty,
I feel my temperature rising
Higher higher
Its burning through to my soul

Ooh, ooh, ooh,
I feel my temperature rising
Help me, Im flaming
I must be a hundred and nine
Burning, burning, burning
And nothing can cool me
I just might turn into smoke
But I feel fine

I slept on a park bench for 20 minutes to avoid the heat on the third day. The third day went on for something like three days, by the way. The passes were the easy part, but the endless big rollers just never gave up.

I experienced the fractured scablands up close and personal.

Stealing a line from Nick Bull, I crossed the railroad tracks and left behind something that would have horrified the leave no trace crowd. I too am sorry. 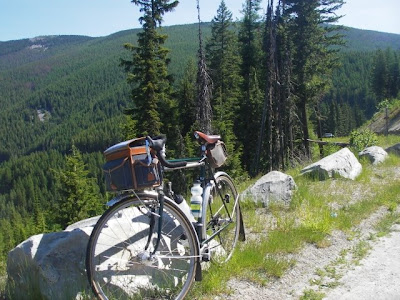 Riding through the night, with a clear sky in Montana and seeing a shooting star and the milky way when I was just about in was magical.

I had a short-lived state of euphoria after nuking a dark chocolate Frappuccino in a convenience store that conveniently stayed open a few extra minutes for those two crazy guys on bikes.

When I finally pulled into the hotel in Whitefish, I was all verklempt. (Extra points for using that in a sentence.) Yes, I really want to go to Paris, but it's OK if I don't make it. That's really how much I enjoyed this ride.

Burgers and beer are excellent in Whitefish. So are the pizza, the ice cream, the cherries, watermelon, eggs, bacon, toast, OJ, coffee, lattes, and the scones. Food on the train, not so much.

Amtrak is a lot like the 77 bus, and it's a great place to pick up all sorts of tricks for dealing with your parole officer. (Your P.O. to the in crowd).

Thanks so much for running this ride again. Thanks for the help from the pre-ride and the others who helped get me through. Thanks for all the help holding down the fort while I was out playing.

I'm really really glad I brought a camera, and I tried to take a ton of pictures. Here are some teasers, but the rest can be found here: 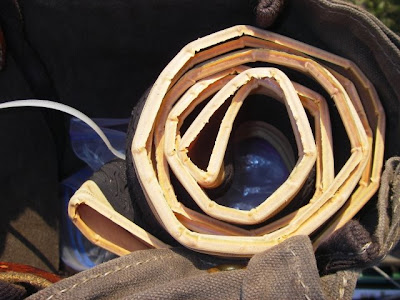 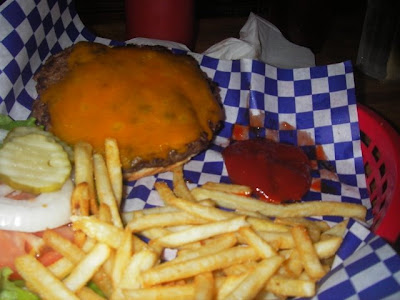 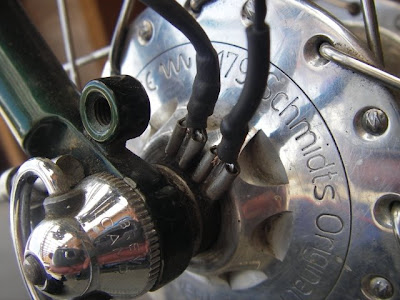 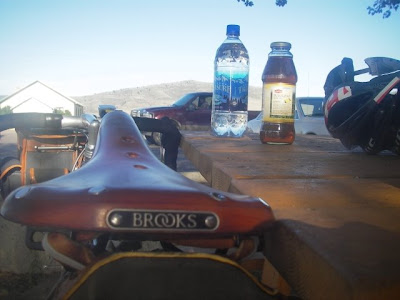 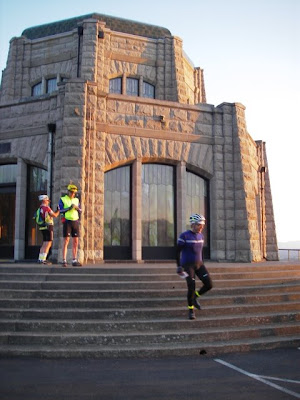 I'm Not Dead Yet 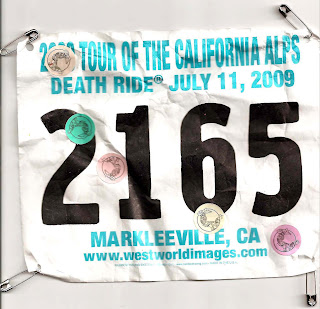 So, I need to write up a report and post some pictures from the Portland to Glacier ride. That really was a big deal experience for me, so perhaps I'm hesitating on the write-up.

In the meantime, I'm happy to report I have survived The Death Ride.

At the beginning of the year, I made this my goal. I tried, honest I did, to lose some weight, and I trained as much as I could. I did not think I would ride a series this year; instead I was going to spend a little less time on the bike, and try to get faster. Well, that's not how things turned out, for I did the series, and then it just wasn't possible to avoid Glacier.

Anyway, it turns out that I was ready for The Death Ride. My Pegoretti is a whole lot lighter then a fully loaded brevet bike, so it really did feel a bit like "race day." You mean I don't need to carry everything? You are going to have food and water all over the place? Sunscreen? Porta-potties without lines? With toilet paper? Honest? Sweet!

I rolled out early with lights and extra clothes. I loved the morning riding. The first couple of passes could lull you into a sense of complacency and lead you to think that this would be, as one rider remembered, "frighteningly easy." Even though I was pumping in various electrolytes at an alarming rate, I started the first mild cramping on the third pass. Cramps dogged me on and off the rest of the day. I suppose I'm just not used to 5% humidity. So, it wasn't easy, but it sure was fun.

The most fun, by far, was the descent back off Ebbett's Pass. It was technical with off-camber turns and bumps; there were a couple of places where you could be launched into the void if you were not careful. It just went on forever. On most passes, I'm always floored how fast you get down for all the effort going up; it was not the same on Ebbett's. The descent went on and on. Then, it went on some more. Then you ate lunch and went down some more after that.

I think I saw Mr. Boothby going to other way, but I'm not sure. Let me know if you heard some random guy yell, "go Boothby" as you flew down Monitor.

I should have brought the pop up and camped at the start.

The driving was a bit much, but I got to eat lunch at Crater lake and nap in a beautiful park next to a river near Mt. Shasta. No, it was not the worst experience ever.

I was at the top of Carson Pass on a bike once before. It was 1983, and I was on a blue Raleigh Pro with full camping gear and a 42 28 low gear heading east. 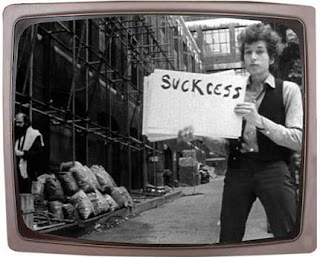 Vinnie's in the basement
Mixing up a supplement
I'm on the pavement
Thinking about a condiment
The man in the control
Card out, sign off
Says he's got a Rohloff
Wants to get it paid off

Look out kid
It's somethin' you did
God knows when
But you're doin' it again
You better tuck down the mountain way
Lookin' for a new friend
The man in the Riv-dale cap
With the big Ben
Wants eleven speed chain
You only got ten.

Look out kid
Don't matter what you did
Ride with frozen toes
Just try No Doz
Better stay away from those
Who might just expose
Keep a clean nose
Smell the wool clothes
You don't need a weather man
To know which way the wind blows.

Get sick, get light
Hang around the overnight
Get a food bite
Fix the flat right
Drink some Ensure
Watch the car door
Get out and ride some more
Tell your friends about your saddle sore

Look out kid
You're gonna get hit
No users, cheaters
Six-time anciennes
Talkin' 'bout Parisiennes
Girl ridin' so cool
Lookin' for a new fool
You can ride a beater
Turn miles into meters.

Wake up, keep warm
Free beer, rain gear, learn to spin
Get dressed, obsessed
Try to be a success
Climb up, climb down, ride fixed
Just spin, don't shift
Twenty years of schoolin'
And they put you on the fleche trip

Look out kid
Your gonna want a Schmidt
Better jump over manhole
Hold on to the handle
Might wear sandals
Try to avoid the scandals
Don't wanna be a bum
You got to sleep some
The pump don't work
Cause the vandals took the handles.